I used to eat a lot of natural foods until I learned that most people die of natural causes.

Gardening Rule: When weeding, the best way to make sure you are removing a weed and not a valuable plant is to pull on it. If it comes out of the ground easily, it is a valuable plant.

The easiest way to find something lost around the house is to buy a replacement.

Never take life seriously. Nobody gets out alive anyway.

An unbreakable toy is useful for breaking other toys.

Health is merely the slowest possible rate at which one can die.

Give a person a fish and you feed them for a day, but teach that person to use the Internet and they won't bother you for weeks.

Some people are like Slinkies ... not really good for anything, but you still can't help but smile when you see one tumble down the stairs.

Have you noticed since everyone has a camcorder these days no one talks about seeing UFOs like they use to?

Whenever I feel blue, I start breathing again.

All of us could take a lesson from the weather. It pays no attention to criticism.

Why does a slight tax increase cost you two hundred dollars and a substantial tax cut saves you thirty cents?

In the 60's, people took acid to make the world weird. Now the world is weird and people take Prozac to make it normal.

Never agree to plastic surgery if the doctor's office is full of portraits by Picasso.

1. Never, under any circumstances, take a sleeping pill and a laxative on the same night.

2. If you had to identify, in one word, the reason why the human race has not achieved and never will achieve its full potential, that word would be "meetings."

3. There is a very fine line between "hobby" and "mental illness."

4. People who want to share their religious views with you almost never want you to share yours with them.

5. And when God, who created the entire universe with all of its glories, decides to deliver a message to humanity, He will NOT use, as His messenger, a person on cable TV with a bad hairstyle.

6. You should not confuse your career with your life.

7. No matter what happens, somebody will find a way to take it too seriously.

8. When trouble arises and things look bad, there is always one individual who perceives a solution and is willing to take command. Very often, that individual is crazy.

9. Nobody cares if you can't dance well. Just get up and dance.

11. Take out the fortune before you eat the cookie.

12. The most powerful force in the universe is gossip.

13. You will never find anybody who can give you a clear and compelling reason why we observe daylight savings time.

14. The one thing that unites all human beings, regardless of age, gender, religion, economic status or ethnic background, is that, deep down inside, we ALL believe that we are above average drivers.

15. The main accomplishment of almost all organized protests is to annoy people who are not in them.

16. A person who is nice to you, but rude to the waiter, is not a nice person.

17. Your friends love you, anyway.

All people fall into four basic age groups, and you can determine in which age group you belong by asking just one question: "What's the first thing you think of when someone says, 'Happy Hour'?"

...if it's "Happy hour means time to go outside and play with my friends," then you're a kid.

...if it's "Happy hour means getting together with friends after work for a few drinks," then you're young.

...if it's "Happy hour means having time for a short nap in the afternoon," then you're middle aged.

...and if it's "Happy hour is when the laxative kicks in and my bowel movements are regular," then you're old.

1. Your supply of brain cells is finally down to manageable size.

2. Your secrets are safe with your friends because they can't remember them either.

4. People no longer view you as a hypochondriac.

5. There is nothing left to learn the hard way.

8. You can have a party and the neighbors don't even realize it.

9. You no longer think of speed limits as a challenge.

10. You can sing along with elevator music.

12. Your investment in health insurance is finally beginning to pay off.

Old is when you realize that caution is the only thing you care to exercise.

Old is when you have a choice of two temptations and you choose the one that will get you home earlier.

Old is when when you are cautioned to slow down by the doctor instead of by the police.

Old is when "getting a little action" means you don't need to take any fiber today.

Old is when "getting lucky" means you find your car in the parking lot.

Old is when an "all nighter" means not getting up to pee!

Old is when you're sitting in a rocker and you can't get it started.

Old is when your friends compliment you on your new alligator shoes and you're barefoot.

Old is when going bra-less pulls all the wrinkles out of your face.

Old is when you don't care where your spouse goes, just so you don't have to go along.

More great things about getting older

It's harder and harder for sexual harassment charges to stick.

No one expects you to run into a burning building.

In a hostage situation, you are likely to be released first.

3. 20 Questions Shouted into Your Good Ear

8. Pin the Toupee on the Bald Guy

You're not REALLY old until...

1. You sell your home heating system at a yard sale.

2. You have to write post-it notes with your kids' names on them.

3. You change your underwear after a sneeze.

Archaeologists in Britain found part of an ancient door. It had a stone hinge on it.

Ever since my friend had all the digits amputated from his feet, I find him very annoying. I think I might be lack-toes intolerant.

My biologist friend tells me that constantly developing new varieties of plant can be a strain.

The pirate captain was standing in his treasure pile. He didn't have very much -- his booty was only shin-deep.

He ate wheat even though he was allergic to it because he was a gluten for punishment.

I changed my i-Pod name to Titanic. It's syncing now.

When chemists die, they barium.

Jokes about German sausage are the wurst.

A soldier who survived mustard gas and pepper spray is now a seasoned veteran.

How does Moses make his tea? Hebrews it.

I stayed up all night to see where the sun went. Than it dawned on me.

This girl said she recognized me from the vegetarian club, but I'd never met herbivore.

Class trip to the Coca-Cola factory? I hope there's no pop quiz.

The Energizer bunny was arrested and charged with battery.

How do you make holy water? Boil the hell out of it!

Did you hear about the cross eyed teacher who lost her job because she couldn't control her pupils?

If you get a bladder infection, urine trouble.

I tried to catch some fog. I mist.

England doesn't have a kidney bank, but it does have a Liverpool.

I dropped out of communism class because of lousy Marx.

I got a job at a bakery because I kneaded dough.

Haunted French pancakes give me the crepes.

A cartoonist was found dead in his home, but the details are sketchy.

The earthquake in Washington was obviously government's fault.

Be kind to your dentist. He has fillings, too. 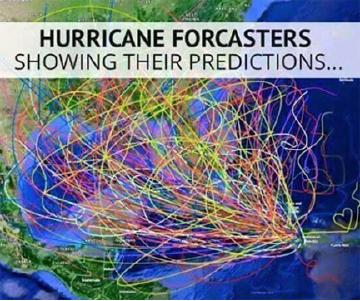 We're about to enter the peak of the hurricane season. Any day now, you're going to turn on the TV and see a weather person pointing to some radar blob out in the Atlantic Ocean and making two basic meteorological points:

Yes, hurricane season is an exciting time to be in Florida. If you're new to the area, you're probably wondering what you need to do to prepare for the possibility that we'll get hit by "the big one." Based on our experiences, we recommend that you follow this simple three-step hurricane preparedness plan:

If you own a home, you must have hurricane insurance. Fortunately, this insurance is cheap and easy to get, as long as your home meets two basic requirements:

(1) It is reasonably well-built, and

(2) It is located in Nebraska.

Unfortunately, if your home is located in Florida, or any other area that might actually be hit by a hurricane, most insurance companies would prefer not to sell you hurricane insurance, because then they might be required to pay YOU money, and that is certainly not why they got into the insurance business in the first place. So you'll have to scrounge around for an insurance company, which will charge you an annual premium roughly equal to the replacement value of your house. At any moment, this company can drop you like used dental floss. Since Hurricane Andrew, I have had an estimated 27 different home-insurance companies. This week, I'm covered by the Bob and Big Stan Insurance Company, under a policy which states that, in addition to my premium, Bob and Big Stan are entitled, on demand, to my kidneys.

Your house should have hurricane shutters on all the windows, all the doors, and -- if it's a major hurricane -- all the toilets. There are several types of shutters, with advantages and disadvantages:

As the hurricane approaches, check your yard for movable objects like barbecue grills, planters, patio furniture, visiting relatives, etc.. You should, as a precaution, throw these items into your swimming pool (if you don't have a swimming pool, you should have one built immediately). Otherwise, the hurricane winds will turn these objects into deadly missiles.

If you don't evacuate, you will need a mess of supplies. Do not buy them now! Florida tradition requires that you wait until the last possible minute, then go to the supermarket and get into vicious fights with strangers over who gets the last can of SPAM.

Of course these are just basic precautions. As the hurricane draws near, it is vitally important that you keep abreast of the situation by turning on your television and watching TV reporters in rain slickers stand right next to the ocean and tell you over and over how vitally important it is for everybody to stay away from the ocean.